This week of #107days is focused on the amazing Justice Quilt which is coming to the end of its residency at People’s History Museum, Manchester.

Jack, who took the awesome photos in the last post, wrote us a guest post about his visit to see it at the weekend:

I am truly honoured to have my photos on here. When we got there on Saturday, first of all I was trying to capture the quilt from every possible angle I could find (Sara if you want about 30 more photos of the exact same thing but with more blur, random building structures, people in the way and poor lighting, I’ve got you covered).

Then I began to look properly, still taking photos of course, but looking at each individual patch.

Ceri, Phil and I were there pointing out all the incredible intricate designs for about the next half hour and then when we went upstairs (I was looking for more angles) we found that we’d just missed another load of amazing ones! dude. was my first favourite, although I ended up with about half the quilt as my favourite in the end.

I think that’s what struck me the most when I was there, this absolutely huge quilt, full of so many different wonderful messages and memories. If I could stitch, I think I would’ve liked to have done one like dude. Sara, you’re one of the few people I know that still says dude and I think I associate it with you just as much as I do the blog!

For me that’s a happy thought and a sad thought. If I’m honest, I don’t read the blog as much as I used to. When I think of the blog I think of the fantastic stories I read when Rosie first told me about the blog one night in first year (2011). (I’m paraphrasing but) She described it as an embarrassingly great selection of stories from home that she looked at whenever she felt homesick or upset. A few months later I was trusted with the URL, read a few stories (Johnny English cave story remains a firm favourite) and signed up for emails much to Rosie’s dismay! I was experiencing the more entertaining part of the life of the dude in real time now, but I never met the dude, so I associate dude. with you and the blog. Even when I read the stories again now I’ll hear the TO FANCY OR NOT TO FANCY? THAT IS THE QUESTION in Tom’s voice (it does sound like something he’d say). I’ve never heard Connor’s voice, I don’t know what it sounds like.

But then again that’s something I find strangely wonderful. Having been around so much since his death, heard so many stories about what a caring, kind and funny young man he was (sometimes I’ll even work them into the conversation to get Rosie to re-tell them, sshh!) and reading them myself before this all happened I feel like I know him despite all this. I think that’s testament to all of you and I’m sure many of the people who contributed to the quilt or to #JusticeforLB or any of this without ever meeting Connor, just like me, feel the same.

I often think about how I nearly met Connor. If I’d been friends with Rosie just a few months earlier in first year, maybe even a few weeks earlier then I may have come down with Ceri and the other Manchester lot and met him during Easter 2012. Later on Saturday Ceri was telling me about how when she’d met him that Easter he was mostly watching videos of trucks on youtube and listening to techno music, from what I know I’d say she had a pretty classic experience of Connor, an experience she described as pretty cool. I’d say she was probably right.

But then I think about how that thought process is utterly ridiculous.

I should have met Connor in August 2013 when I was going to visit Rosie.

When I brought you lemon cake on the 8th of July 2013, he should have had a slice, or ten.

I should be reading hilarious stories that come into my inbox every few weeks.

I should have my own stories to tell other people.

This should never have happened.

When we first saw the quilt Ceri pointed out the teardrop with HOWL written in it, she told me how whenever she sees a mydaftlife post with a howl caption, she feels compelled to read it. When we went upstairs Ceri saw a chalkboard supposed to be a discussion board about whether or not Nigel Farage and other politicians have right to a private life. Having seen the quilt she felt compelled to write #JUSTICEFORLB all over it instead.

I saw the quilt and felt compelled to write Fuck Southern Health.

The Justice Quilt emerged out of the wonder of #107days last year, patches were crowdsourced from across the world and lovingly stitched together into the magnificent quilt by Janet Read, Janis Firminger, Margaret Taylor and Jean Draper. You can read about the process of making the quilt here. 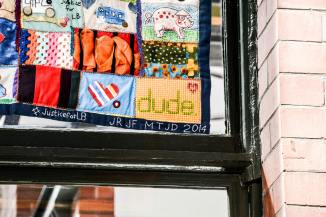 This year as part of #107days Take 2 the quilt has taken up residency at the People’s History Museum in Manchester. It is there until Wednesday, 22 April so you’ve another three days to pop along and view it in this magnificent setting. It continues its travels after Manchester, moving to Lancaster University, more about that in due course. 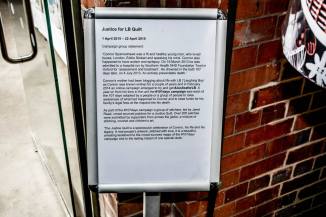 This week we will share some of the quilt selfies on this blog and people’s reactions to seeing the quilt. We have some of these from twitter, but we’d love to hear more. Drop us a tweet or a comment on this post of what you felt when you saw the quilt. If you stitched a patch we’d also love to hear from you (whether you’ve seen the quilt of not yet) – why did you get involved, how did you decide on your quilt design, how did you find stitching a patch, what do you think of the final masterpiece?

These amazing pictures in today’s post were taken by Jack; here’s a few more for you to enjoy: 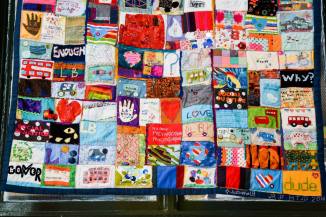