Day 60 was adopted by Beck from Frog Orange. At 3pm this afternoon everyone is welcome to join them at Shotover (at the top by the car park) to release 107 red balloons in memory of LB. Here’s what Beck had to say about why she wanted to support #JusticeforLB and the #107days campaign:

I wanted to adopt a day as part of the #JusticeforLB campaign for a number of reasons. I started reading Sara’s blog a few months before Connor was admitted to the treatment and assessment unit. I enjoyed Sara’s writing, her photography, her sense of humour.

I enjoyed reading about her musings about her family life and the little community we share. It was the only blog I ever requested to have emailed to my inbox. Naturally after Connor was admitted some of Sara’s entries made for really tough reading. I’ll never forget reading the few words she wrote on July 4th 2013. The horror, sickness and sadness I felt was so powerful.

I can not imagine the pain that Connor’s family and buddies are going through.

I was appalled by the non care that Connor received.

I was astonished how Sara and her family were treated during his stay.

I was horrified that Connor was allowed and left to drown in these circumstances.

And I have been disgusted by the way NHS Southern Health have behaved since.

I know Sara and Rich a little, we’ve hung out socially a few times and they have been customers (at Frog Orange) for years. Rich used to come in with Connor, his brothers and sister. He used to carefully herd them around the shop helping them spend their Christmas money.

One of the main reasons for taking part in this campaign is because if you know Sara and Rich at all, you know what utterly fabulous parents they are. They are just so bloody good at the whole parenting thing. It is just TOO cruel that they cared so well for Connor along with his brothers and sister, and within 107 days in the unit, he was gone.

So why balloons? Well, I don’t write a blog that anyone reads and so many wonderful people have written such powerful pieces in defence of Connor and his family. I thought maybe something visual would be good. A little time out in the fresh air thinking about the sunshine that LB brought to his family and friends. And if somebody finds a tag with #107days #JusticeforLB they might google it and spread the word. Let’s hope so. 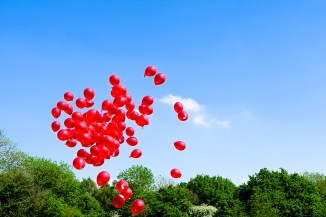 Just to be completely transparent (it’s a style we’re deeply committed to), we had a comment on our post and facebook page from Vicky who was worried about the environmental impact of releasing balloons. It is something we have considered, and decided the risks are worth taking, you can read the discussion here.

Please do come along if you’re in the Oxford area and would like to join us and please do share any photos on twitter with the #JusticeforLB and #107days hashtags. Thank you.

The super talented Izzi Crowther decided to produce an adaptation of Nena’s 99 red balloons for LB. So much love and so much awesome, here’s to the dude:

You and I, and the Frog Orange shop
Buy a bag of balloons with the love we’ve got
Set them free at 3 o’clock
‘Til one by one, they were gone…