Yesterday we shared a post from Mark Neary on the eve of Draft 2 of the #LBBill. Today, on the eve of the 2015 General Election, we unveiled Draft 2 over on the LBBill website. Here, Steve Broach, introduces the changes from the first draft:

It’s been a while coming, but we hope Draft 2 of the #LBBill is worth the wait.

As previously blogged, we have had tonnes of feedback on Draft One of the Bill, by email, on social media and in a number of brilliant face to face meetings and events. We were pleased to see that although lots of people wanted the Bill to go further and do more, there was little if any disagreement at the idea of a new law to protect the rights of disabled people to live in their communities where they choose.

These were the criteria we used to decide what changes we made to Draft 2: 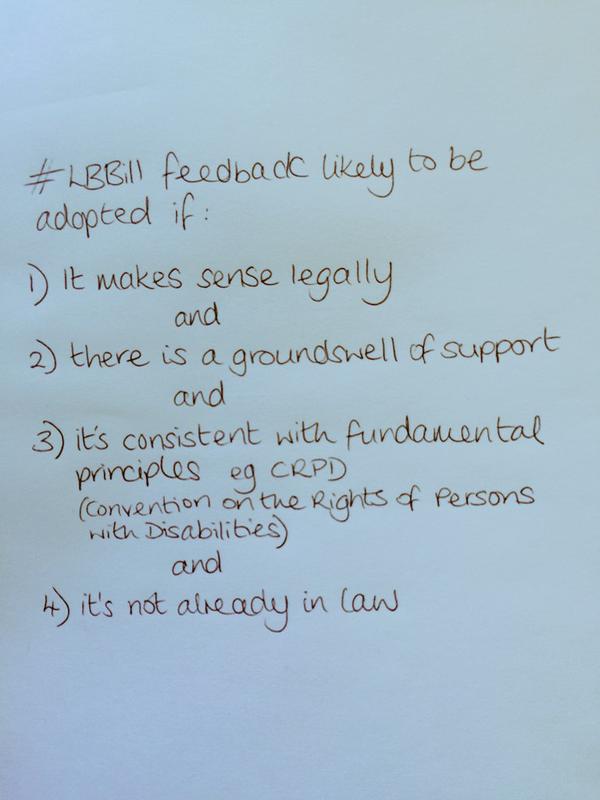 A key theme of the second draft is a stronger focus on enforceable rights rather than general duties. This is most obvious in Clause 1, which now would give disabled people a right to choose where they live unless the Mental Capacity Act or Mental Health Act is used to force a different outcome. We have also made the right on the state to take account of cost and its resources in Clause 4 subject to this duty. This all gives a much stronger focus on the rights contained in Article 19 of the UN Convention on the Rights of Persons with Disabilities.

Another major change is in Clause 8 in relation to the Mental Health Act. There was extensive debate on this, and in the end we felt that the best option was to retain the Mental Health Act as an alternative to disabled people being sent to prison for criminal offences. Clause 8 would still though stop disabled people being ‘sectioned’ under the civil provisions just because they have autism or a learning disability. We welcome more debate and discussion on this key issue.

While we have the MP’s attention with the Bill, we want to take the opportunity to ban the use of ‘secret’ panels to make any decisions about disabled people’s care – this is new Clause 10.

There are a number of other changes, please check out the drafts for more. I particularly like the new clause 3(3), which would require the employment of disabled people in teams responsible for commissioning and planning services.

One of the strongest messages I took from the debate on Draft 1 is how little trust there is now for the state to ‘look after’ disabled people. When disabled people and families were speaking about ‘safeguarding’, they meant protection from the state, not by the state. At its heart this lack of trust comes from an unequal power relationship and the constant threat of state-sanctioned violence, as Chris Hatton has written about recently.

We hope #LBBill can play a part in redressing that balance and promoting proper respect for disabled people’s human rights, like the best public bodies show now. Having considered the new Care Act I’m convinced we need to go further in the ways that Draft 2 of #LBBill suggests to get the kind of legal scheme we need.

Feedback on Draft 2 is very welcome. There can be a Draft 3 if the feedback shows it’s needed. In the meantime as soon as the dust settles on the election we will be asking everyone to lobby their new MP to support the Bill. Even though the No Rights Ignored green paper contains some of the ideas in the Bill it goes nowhere near far enough, so we will still be looking for a backbench MP to adopt the Bill at the Private Members Bill ballot in July.