A month now already since the ‘end’ of #107days and we’re delighted that the momentum continues. With little/no effort from those of us in the #107days shed (which is lucky as the shed has been largely empty for the past four weeks). So here’s a taste of some of the post #107days actions… in no particular order:

Continuing on a running note, Natasha @notsurejustyet is celebrating her 40th birthday shortly and has decided to mark it by running a 10k race to fundraise for LB’s Fighting Fund and SNAAP.

In another one of those remarkable coincidences or happenings that have sprinkled magic dust over this campaign, we received the following message and photo on our facebook page:

We are very grateful to all these healthy fundraisers.

Away from the exercise track, My Life My Choice held their monthly Sting Ray night club evening in LB’s memory with a raffle and ticket sales for the fund and LB’s favourite songs on the playlist. It was a brilliant evening with punters from across Oxford dancing their socks off all night. Amy Simmons wrote a wonderful and moving song titled Laughing Boy:

How could the world keep spinning?

Why does this house no longer feel like home?

Who are you to judge the value of his life, claim the cost is far too high?

Deciding who should live or die?

I’m surrounded by friends, but still I feel alone.

The choice was never yours to make!

I will not lay down my sword, for the world can ill afford,

To grow war weary, tired or bored, I cannot go back on my word.

Until justice has been done, for a life that’s been and gone…

But eighteen years is hardly time at all.

I fight because I have to, there’s no happy ever after,

My world no longer filled with laughter.

My world no longer filled with joy…

In other fundraising news, Pru has created chocolate buses for sale at her online chocolate shop and is selling them for £1.07 plus P&P, with proceeds to the fund.

Other edible fundraisers included a cake sale by Rosa, Ruby and friends:

…..before the flag was washed and Dan Goodley and Katherine Runswick-Cole continued the global march of the LB flag.

As Katherine emailed ‘Just to say that the response to #JusticeforLB was amazing in Melbourne and Singapore and it was so exciting for us to watch the #LBBill emerging on twitter while we’ve been away’.

Over the last month, awareness raising has also continued at a pace. Chris and Becky were tweeting from the IASSID Conference in Vienna and Max presented on #JusticeforLB at the #PDXGathering in Portland.

Closer to home #JusticeforLB was introduced to the JSWEC audience by a number of supporters including Hannah, Liz and Jo.

Jackie also worked her magic on the Social Care Curry punters and arranged a donation for #JusticeforLB.

Sue Bott, of Disability Rights UK also raised the experience of LB through our amazing animation, with those at their Independent Living conference #ILVision 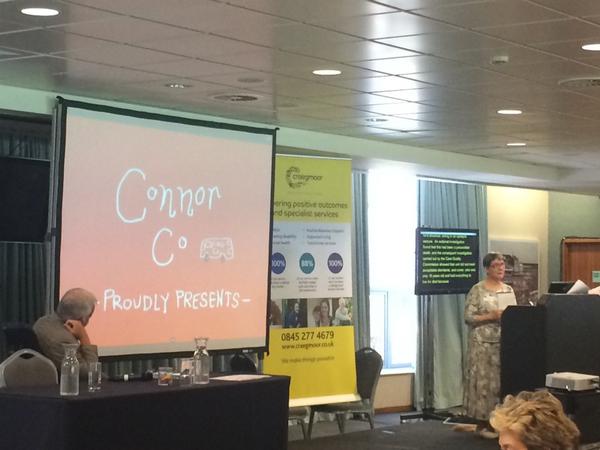 LB made it into Hansard, a significant and heart breaking milestone:

In other news, we are submitting a chapter about #107days and #JusticeforLB to a new edited book about social media and disability published by Ashgate. Animated and committed discussions are happening around the development of a Private Members Bill (currently ‘nicknamed’ the ‘LBBill’) to ensure that people have the right to live in their own home (an idea extraordinary with its simplicity). A facebook group has been set up to capture early discussions around this.

Finally, the Justice Quilt is being finished by the magical team of stitchers led by Janet Read and rumours are, it will be launched at the forthcoming Disability Studies Conference (9-11th September at Lancaster University) before being displayed at three other UK destinations across the next 12 months, yet to be decided.

So, as you can see any hopes of #JusticeforLB becoming quieter or less visible post #107days are entirely unfounded. Thank you all for your continued support.

5 thoughts on “Maintaining momentum after #107days”